The entire reason I took Computer Music this semester was so that I could learn how to do this with 110 lines of code.

Facetiousness aside, it was a great class overall. Rob Hamilton is a talented and helpful professor; between touring EMPAC’s beefy recording interface and learning two music programming paradigms, his section of Computer Music was some of the most fun I’ve had in a college class.

One such paradigm is ChucK, an open-source, strongly-timed programming language written in C++ by eccentric food-loving professors at Princeton. Its formula of writing functions to advance time, whose threads (shreds) are then forked (sporked) to on a virtual machine which makes sounds, clicks much better with my brain than the patch-cable-spaghetti-untangling of its opposite, Max/MSP. ChucK is an extremely versatile programming language–you can use standard library functions for anything from simulating the sound of a blown bottle to sonifying the Towers of Hanoi.

The weekend Rob told each of us to familiarize ourselves with ChucK, I messed around with it for just a little while until I caught the transcription bug. This bug I nurtured throughout high school arranging every voice I could in prog metal songs yielded the following program: 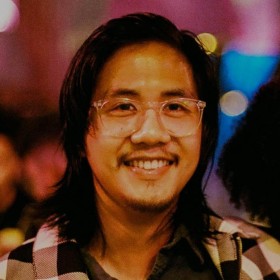